From Ethnography to Ethno-Graphic: Representing the Work of the Police

CLICK HERE TO REGISTER
** After registering, you will receive a confirmation email containing information about joining the Zoom webinar. Please note, you will only be able to join the webinar at the specified time and date.

During the 15 months between the death of Zyed Benna and Bouna Traore and subsequent unrest in the Paris suburb of Clichy-sous-Bois in 2005, and the deaths of the adolescents Moushin and Laramy and subsequent uprising in another Paris suburb, Villiers-le-Bel, in 2007, Dider Fassin conducted research on police work in poor neighborhoods on the outskirts of Paris. His research focused on the everyday life of the dreaded anti-crime squads, ordinary racial discrimination and the banality of violence.

This research was initially translated into a book (“Enforcing Order: An Ethnography of Urban Policing,” Polity, 2013), as can be expected from an ethnography, and more recently, into comics that comprise an ethno-graphic (“La force de l’ordre. Une enquête ethno-graphique,” Seuil/Delcourt, 2020).

Fassin’s lecture will reflect on the variations in representation of this research as it related to the chosen form, and on their echoes in the public sphere as events involving police abuses unfold.

Didier Fassin, James D. Wolfensohn Professor of Social Science, Institute for Advanced Study, Princeton University, and Annual Chair in Public Health, Collège de France, is an anthropologist and a sociologist who has conducted fieldwork in Senegal, Ecuador, South Africa and France. Trained as a physician in internal medicine and public health, he dedicated his early research to medical anthropology, focusing on the AIDS epidemic and health inequalities. He later developed the field of critical moral anthropology, which explores the historical, social, and political signification of moral forms involved in everyday judgment and action, as well as in the making of national policies and international relations.

Fassin has also carried out an ethnography of the state, through a study of urban policing and the prison system. His recent work is on the theory of punishment, the politics of life and the public presence of the social sciences, which he presented for the Tanner Lectures, the Adorno Lectures  and at the Royal Swedish Academy of Sciences, respectively. A recipient of the Nomis Distinguished Scientist Award, he is currently involved in a global program on crises, examining in particular the cases of migrants and refugees. For his course at the Collège de France, he explores contemporary stakes in public health, with special reference to the coronavirus pandemic.

He regularly contributes to newspapers such as Le Monde and magazines such as the London Review of Books. His recent books include “Humanitarian Reason: A Moral History of the Present” (2011), “Enforcing Order: An Ethnography of Urban Policing” (2013), “At the Heart of the State: The Moral World of Institutions” (2015), “Prison Worlds: An Ethnography of the Carceral Condition” (2016), “The Will to Punish” (2018), “Life: A Critical User’s Manual” (2018), and “Death of a Traveller: A Counter Investigation” (forthcoming 2021).

DISCUSSANTS
Aslı Ü. Bâli is Professor of Law at UCLA School of Law and Faculty Director of the UCLA Law Promise Institute for Human Rights. Her principal scholarly interests lie in two areas: public international law—including human rights law and the law of the international security order—and comparative constitutional law, with a focus on the Middle East.

Aomar Boum is Associate Professor at UCLA Department of Anthropology. He is a socio-cultural anthropologist with a historical bent concerned with the social and cultural representation of and political discourse about religious and ethnic minorities in the Middle East and North Africa. 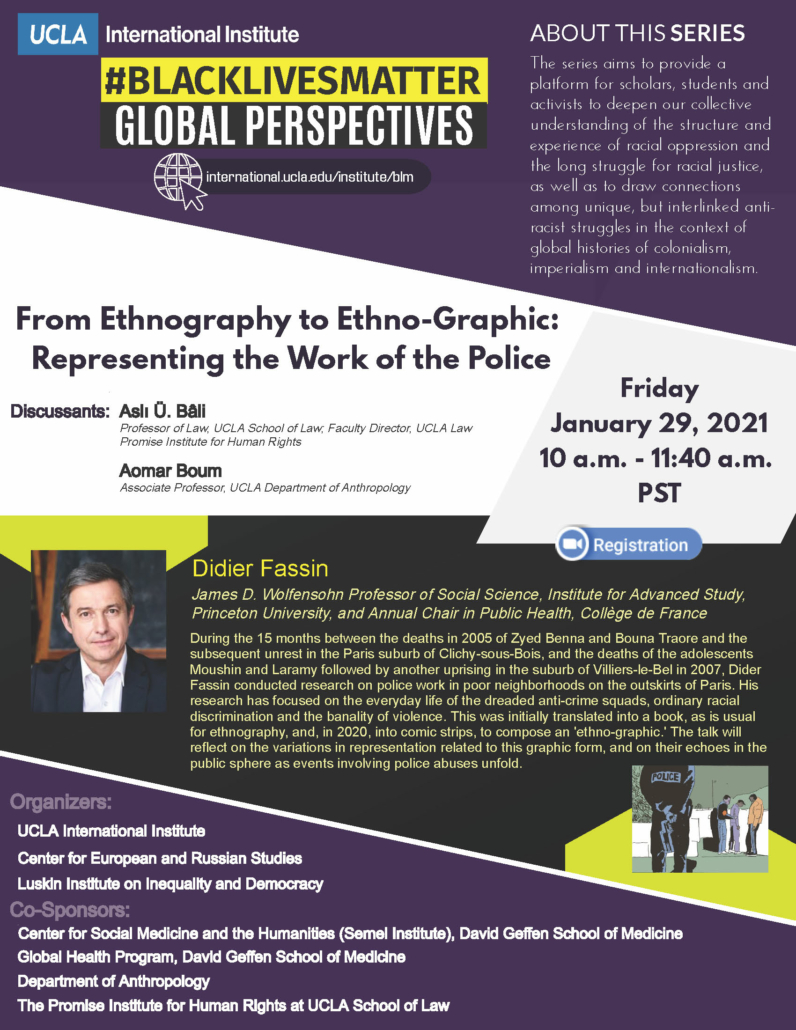