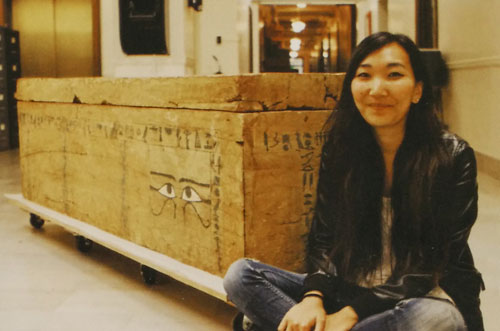 By Jessica Portner (Naturalist, August & September 2015)Hilo Sugita, a volunteer for nearly three years in the Museum’s Anthropology Department, has won a UCLA Library Prize for Undergraduate Research for her work on a pair of ancient Egyptian coffins donated to the Museum in 1928. Sugita, who earned her B.A. in Anthropology last spring, said the true prize has been to work alongside Museum experts decoding its secrets.“I feel so lucky,” says Sugita of her year studying the blue-ink inscriptions on the 4,000-year-old sarcophagi to discover—for the first time—who owned it and when. The Middle Kingdom coffin belonged to a woman named Yi who made a standard offering to Osiris and gods of the underworld according to the hieroglyphs. The well-crafted coffin of imported cedar indicated that, while not royal, Yi’s family was wealthy. Anthropology Collections Manager Chris Coleman has posted some translations of the hieroglyphs here so that Yi’s long-buried ancient world—and the Museum’s treasures— can come into the 21st Century’s light.