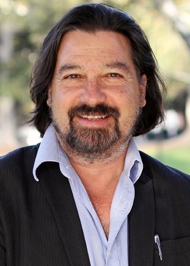 Charles Stanish has worked extensively in Peru, Bolivia, and Chile, conducting archaeological research on the prehistoric societies of the region. His theoretical work focuses on the roles that trade, war, and labor organization play in the evolution of human cooperation and complex societies.  His books include Lake Titicaca: Legend, Myth, and Science (2011), Ancient Titicaca: The Evolution of Complex Society in Southern Peru and Northern Bolivia (2003), Ritual and Pilgrimage in the Ancient Andes (with B. Bauer, 2001) and Ancient Andean Political Economy (1992). He also works with a sustainable development group to preserve global cultural heritage through a combination of micro-lending, direct community grants, and tourist infrastructure development. He was a Senior Fellow at Dumbarton Oaks Research Library, is a Fellow of the American Academy of Arts and Sciences and is a member of the National Academy of Sciences of the United States.

Islands of the Sun and the Moon

Stanish, Charles
2010 Measuring time, sacred space and social place in the Inca Empire. In The Archaeology of Measurement, edited by I. Morley and C. Renfrew, pp. 216-228. Cambridge, Cambridge University Press.

Stanish, Charles
2009 The evolution of managerial elites in intermediate societies. In The Evolution of Leadership. Transitions in decision making from small-scale to middle-range societies, edited by K. Vaughn, J. Eerkens, and J. Kanter, pp. 97-119. School of American Research, Santa Fe.

Aimée Plourde (co-chair with R. Boyd), Ph.D 2006. “Prestige goods and their role in the evolution of social ranking: a costly signaling model with data from the late formative period of the northern Lake Titicaca Basin, Peru.”

Amanda Cohen, Ph.D. 2010. “The Significance of Sunken Court Architecture to the Development of Sociopolitical Complexity”