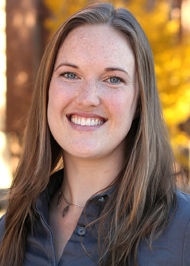 I study the acquisition and evolution of human language. My work bridges the biological and linguistic subfields and involves both comparative and developmental approaches to communication.

I am interested in how the multimodal aspects of communication contribute to and constrain the construction of meaning in spontaneous interaction. I am particularly interested in whether gesture played a role in the origins of human language. While this is a difficult question to address directly, I approach it from a number of different angles: by studying how great apes learn and use gestures, and how human children gesture (and learn from the gestures of others) before they are fully proficient in spoken language.

I focus on embodied behavior—gesture, action, and gaze—as ways of measuring communicative intent, social cognition, and the richness of the developmental environment. Gesture is an ideal medium for investigating what communicative structures and meanings can exist without language. I focus on two main areas of inquiry: gesture’s role in the origin of language, and the dynamic relationship between early social interactions and infant communicative development.

Both my great ape and human research involves observing spontaneous interactions between communicative partners as well as employing communication games that allow for more controlled experimentation. All my primate work takes place in American and European zoos. This research has focused on orangutans, but planned studies will involve comparison with other great apes. My work with human children takes place in home environments and at the university. These studies focus on North American children learning English, and involve families with a range of socioeconomic and educational backgrounds.

Currently, I teach courses on The Evolution of Language, Language Development and Socialization, Gesture and Nonverbal Communication, Mixed Methods Research, and Communication, Cognition, and Culture.

Cartmill, E. A., Hunsicker, D., & Goldin-Meadow, S. (2014) Pointing and naming are not redundant: Children use gesture to modify nouns before they can modify nouns in speech. Developmental Psychology. DOI 10.1037/a0036003