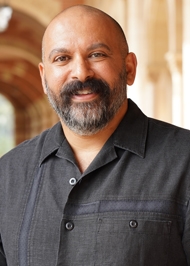 H. Samy Alim is the David O. Sears Presidential Endowed Chair in the Social Sciences and Professor of Anthropology and African American Studies at the University of California, Los Angeles, and the Founding Director of the Center for Race, Ethnicity, and Language (CREAL). His most recent books include Raciolinguistics: How Language Shapes Our Ideas about Race (Oxford, 2016, with John Rickford and Arnetha Ball) and Culturally Sustaining Pedagogies: Teaching and Learning for Justice in a Changing World (Teachers College Press, 2017, with Django Paris). He is also author of Articulate While Black: Barack Obama, Language, and Race in the U.S. (Oxford, 2012, with Geneva Smitherman), which addresses language and racial politics through an examination of former President Barack Obama’s language use—and America’s response to it. He has written extensively about Black Language and Hip Hop Culture in his books, Street Conscious Rap (1999), You Know My Steez (2004), Roc the Mic Right (2006), Tha Global Cipha (2006), Talkin Black Talk (2007), and Global Linguistic Flows (2009).