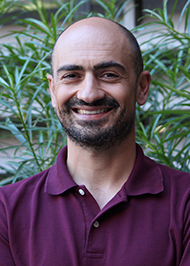 Ippolytos Kalofonos is an assistant professor-in-residence in the David Geffen School of Medicine Center for Social Medicine and the UCLA International Institute, where he teaches in the Global Health Minor. He is a medical anthropologist and a practicing psychiatrist in the Greater Los Angeles Veteran Affairs Medical Center, where he is an Investigator with the Center for Healthcare Innovation, Implementation, and Policy. He has published widely in clinical and social science journals ranging from NEJM, Social Science and Medicine, Medical Anthropology Quarterly, and Current Anthropology.

His first book, “ ‘All I Eat is Medicine’: Going Hungry in Mozambique’s AIDS Economy” (University of California Pres, 2021) traces the legacies of imperialism, extraction, and racialized exploitation and abandonment at the root of large-scale contemporary health crises like the HIV/AIDS epidemic. It presents flesh-and-blood accounts of people in Mozambique living with HIV/AIDS as they navigate the emerging AIDS economy and care for one another as community health workers, volunteers, and activists. The book calls for a global health that goes beyond the distribution of technological magic bullets to one that reckons with the political and economic forces, institutions, and policies that produce social and health inequities in the first place.

He is currently adapting a meaning-centered approach to understanding unusual experience based on principles from the Hearing Voices Movement in a project that draws of the expertise of clinicians, Veteran peer support specialists, and Veteran voice hearers at the West LA VA. He is the lead qualitative investigator of a quality improvement evaluation of a “safe camping” initiative on the campus of the West LA VA. He has also been active in local advocacy efforts around decarceration and decriminalization of homelessness and mental illness.

With Adia Benton, Thurka Sangaramoorthy. Temporalities and Positive Living in the Age of HIV/AIDS – A Comparative Ethnography. Current Anthropology; 58(4): 454-476, 2017.

Ippolytos Kalofonos. “All I Eat is ARVs”: The Paradox of AIDS Treatment Programs in Central Mozambique, Medical Anthropology Quarterly, September; 24(3): 363-380, 2010.