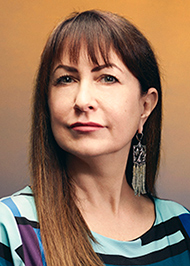 Dr. Shannon Speed is a tribal citizen of the Chickasaw Nation of Oklahoma. She is Director of the American Indian Studies Center (AISC) and Professor of Gender Studies and Anthropology at UCLA. Dr. Speed has worked for the last two decades in Mexico and in the United States on issues of indigenous autonomy, sovereignty, gender, neoliberalism, violence, migration, social justice, and activist research. She has published numerous journal articles and book chapters in English and Spanish, and has published seven books and edited volumes, including her most recent, Incarcerated Stories: Indigenous Women Migrants and Violence in the Settler Capitalist State, which won the Best Subsequent Book Award of the Native American and Indigenous Studies Association in 2019 and a CHOICE Outstanding Academic Title award in 2020. She has a new co-edited volume entitled, Heightened States of Injustice: Activist Research on Indigenous Women and Violence (University of Arizona Press). Dr. Speed currently serves as the Past President of the Native American and Indigenous Studies Association (NAISA). In recent years, she was awarded the Chickasaw Dynamic Woman of the Year Award by the Chickasaw Nation, and the Lifetime Achievement Award from the State Bar of Texas Indian Law Section.