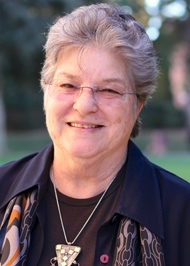 Sondra Hale, born to a working-class family in Des Moines, Iowa, graduated from secondary school in Omaha, Nebraska, and went on to the University of Omaha for a year before transferring to the University of California, Los Angeles (UCLA). She worked her way through high school and university in various jobs, an important one of which was as a professional comic (namely a ventriloquist). She was also active in theater and the visual arts. She married a UCLA geographer, Gerry Hale, and they embarked on a life-changing journey to Sudan where Sondra has since devoted over 50 years of her life to research and friendships.

Sondra’s life has had four components running simultaneously: activism and service to the community; academic teaching, research and writing; activism and creative writing and curatorial projects in the arts; and family life. She is the mother of two daughters from Eritrea and has devoted considerable energy to negotiating the terrain of transracial family.

Prof. Hale received her Ph.D. in Anthropology; M.A. in African Studies; and a B.A. in English Literature–all from UCLA. In addition to UCLA, she has taught at the University of Khartoum (Sudan), California Institute of the Arts, and at California State Universities, Long Beach and Northridge.

Prof. Hale has published Gender Politics in Sudan: Islamism, Socialism, and the State (1996, translated into Arabic in 2011) and many articles and book chapters on the topics of gendered war, conflict, and genocide; social movements; international gender studies; gender and citizenship; diaspora studies; cultural studies, and boycotts and academic freedom. Her regional interests are in Africa and the Middle East, focusing mainly on Sudan and Eritrea. Hale is currently co-editing “Sudan’s Killing Fields: Prelude to Disintegration,” with Laura Beny. Her other work in progress or in press is on the politics of memory, gender and perpetual-conflict situations, political organizing in exile, and the changing concept of the political actor (in Sudan).

There is another side to Prof. Hale’s academic writing; she writes on feminist art and published a co-edited book with Terry Wolverton on From Site to Vision: The Los Angeles Woman’s Building in Contemporary Culture (2011). Her writings on Sudanese modernist artists are well-known and will culminate in a monograph in the future. Her recent journal articles appear in International Journal of Middle East Studies; Comparative Studies of South Asia, Africa, and the Middle East; Urban Anthropology; Cultural Dynamics, Journal of Middle East Women’s Studies; Feminist Economics; Northeast African Studies; Amerasia Journal; and New Political Science; among others. Among her book chapters are: Women and Globalization in the Arab Middle East; Race and Identity in the Nile Valley; Female Circumcision and the Politics of Knowledge; Gender and Citizenship in the Middle East; Anthropology of the Middle East and North Africa; Proceedings of the Workshop on Knowledge Management Capacity in Africa; and others.

Prof. Hale is perhaps known as much for her activism—both local and international—as her academics, but also, as an activist academic, she values the activism she carries out on the various campuses where she has taught, including in the classrooms where she has introduced new and controversial ideas.

Prof. Hale is founder and coordinator of California Scholars for Academic Freedom, a coalition of nearly 200 academics from over 20 institutions of higher education in California. She is also founder and Coordinator of the Darfur Task Force and founder and many other organizations through the decades. She has been active for decades in civil rights campaigns, anti-war movements, and feminist and people of color movements. Her activism against racism has been a significant component of her life. Her support of Sudanese dissidents has, out of necessity, been somewhat disguised but is an important area of her activism.

Although Prof. Hale has experienced a great deal of criticism and harassment because of her sometimes controversial and radical political views (especially for her activism on behalf of Palestinians), she has also been the recipient of a number of awards and honors. In addition to many teaching awards at two institutions, at UCLA Prof. Hale was given the Fair and Open Academic Environment Award from UCLA (popularly known as the “diversity award”) and has been honored in various ways by her Departments. She has received awards from National Science Foundation, American Association of University Women, National Endowment for the Humanities, Fulbright, and others. Twice she was given an award for courage from the community of California State University, Long Beach; a Vesta award from the Los Angeles Woman’s Building for scholarship on the arts; and numerous other awards for service.

In 2011 Prof. Hale received two of her favorite awards: a Life-Time Scholarly Achievement Award from the Association for Middle East Women’s Studies; and from Salmmah Women’s Resource Center (Khartoum, Sudan) an award “In Recognition and Appreciation of Her 50 Years of Commitment and Valuable Contributions in Support of the Sudanese Women’s Movement.”

In between and amongst these activities, Prof. Hale has concentrated on teaching and mentoring—first focusing on undergraduate education and a bit later on graduate students. She has mentored (either on their committees or chairing their committees) over 120 graduate students. She has been Chair or Co-Chair of the Committees of the following graduated UCLA Ph.D.’s: In Anthropology—Elaine Gerber, Kesha Fikes, Judy Stevenson, Worku Nida, Bayard Lyons, Jennifer Esperanza, and Camila Pastor; In Gender Studies—Sharmila Lodhia, Khanum Shaikh, and Azza Basarudin. She is the Chair or Co-Chair of Ph.D. students in Anthropology, Gender Studies, and Islamic Studies: In Anthropology—Amy Malek, Rayed Khedher, and Amber Reed; Women’s Studies—Sabah Uddin, Rana Sharif, Tina Beyene, Naazneen Diwan, Dalal Alfares, Esha Momeni and Gina Singh; Islamic Studies—Kristina Benson.

Although Prof. Hale is technically retired (as of November 1, 2011), she has been recalled to offer a graduate seminar and is co-directing the Center for Near Eastern Studies. She claims she will continue to carry out fieldwork in Sudan and to work on a number of writing projects until she decides to stop. Her friends say this will never happen.

The UCLA Library’s Center for Oral History recorded an extensive interview with Prof. Hale which is available here.

2009 Transnational Gender Studies and the Migrating Concept of Gender in the Middle East and North Africa. Cultural Dynamics, Vol. 21, No. 2, pp. 107-152.

2007 Power and Space: Feminist Culture and the Los Angeles Woman’s Building: A Context. From Site to Vision: The Woman’s Building in Contemporary Culture. Sondra Hale and Terry Wolverton, eds. In Electronic Book http://www.fromsitetovision.org

2007 “At Home” at the Woman’s Building (But Who Gets a Room of Her Own?): Women of Color and Community. With Michelle Moravec. In Electronic Book, From Site to Vision: The Woman’s Building in Contemporary Culture. Sondra Hale and Terry Wolverton, eds. http://www.fromsitetovision.org

Vesta Award for Scholarship in the Arts